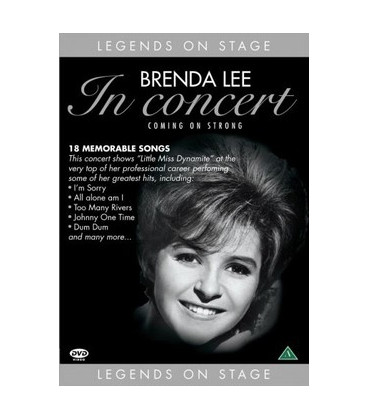 Our DVD release sees the sensational Brenda Lee performing such favourites as ‘Coming On Strong’ and ‘All Alone Am I’ in a memorable 80s concert that clearly shows her at the very top of her professional career.

The diminutive Brenda exploded onto the music scene at the tender age of six, winning a three-year contract to appear on the TV programme Ozark Jubilee. It was from this platform in 1950 that Brenda Mae Tarpley from Lithonia, Georgia, began her journey to worldwide stardom. Nicknamed ‘Little Miss Dynamite’, coined from her single ‘Dynamite’, the young Brenda Lee was on course to take the world by storm.

Her first single ‘Jambalaya’ in 1956 heralded a string of hits including the million seller ‘I’m Sorry’ in 1960, which topped the charts for an incredible six months and won a gold disc in the process. In ’64 she recorded two major releases in the UK with hit supremo Mickey Most and went on in November of the same year to appear before the Queen in a Royal Command Performance, a feat she would never have dreamt possible.

Still performing today to packed audiences throughout the world this married mother of two was and still is as explosive on stage as her nickname implies.

To be determined Forsendelse
0,00 kr I alt