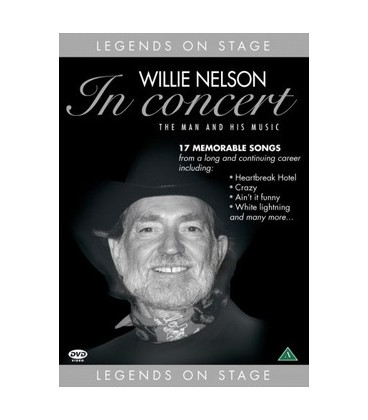 A superb DVD with the self-effacing Willie Nelson performing an inspired selection of the best known songs of his long and continuing career.

Willie was born into a desperately poor family in Abbott, Texas, in 1933. His parents abandoned him at a very early age and he was left with his grandparents, which as fate would have it was where Willie strummed his first guitar. From this faltering start the road ahead was never going to be a smooth one, but his desire to make music overrode all everyday issues such as earning enough to pay the bills or feed his family. It was this dogged dedication to his music that in 1960 spurred him to drive to Nashville armed with his guitar, a clutch of overdue bills, and a 19-year old Buick that was about to push its last piston. Travelling on guts and determination he arrived at his destination and the world began to benefit from his song-writing wizardry with hits recorded by Patsy Kline, Faron Young and Ray Price.

But it was his voice that became his passport to fame; he was ranked 25 in an elite list of the 30 bestselling artists, shifting a massive 31million albums worldwide. Not a bad achievement for a guy with a dodgy Buick!

To be determined Forsendelse
0,00 kr I alt